"In her letter to the NLRB, she said Apple’s employee relations department “intimidated me not to speak about my safety concerns”, that a manager advised she quit Apple and that she was subject to sexism and a “dramatically increased” workload. Matters escalated when she took her complaints to Apple’s Slack channels, specifically a 2,000-member forum for female software engineers. She said she was flooded with supportive comments and similar stories of workplace harassment — but she had since been banned from using Slack as part of her administrative leave."  [link]
​
​Unlawful Employee Policies
"​Apple CEO’s Anti-Leak Edict Broke Law, Ex-Employee Alleges," Bloomberg, Oct 12 2021 [link]

​"The rule described in Cook’s memo and the policies cited in Gjovik’s complaint might be deemed legitimate under the Trump-era Boeing standard, but “most if not all” of them would probably be illegal under earlier, more pro-labor precedents, said University of Wyoming law professor and former NLRB attorney Michael Duff. A case like Gjovik’s offers the Biden appointees “an attractive vehicle” to establish a precedent more like the pre-Trump ones, which prohibited rules that workers could “reasonably construe” as banning legally protected activism, Duff said in an email." [link]​

"The current labor board is very likely to deem statements in Cook’s memo illegal, said former NLRB member Wilma Liebman, who chaired the agency under President Barack Obama. “What he’s saying here goes too far” by limiting discussion about meetings where workplace issues are addressed, rather than only leaks about intellectual property, Liebman said in an interview. “It’s restrictive of people’s ability to talk about employment policies.” [link]

"The Apple handbook includes a footnote stating that the company is not attempting to restrict its employees’ “rights to speak freely about wages, hours, or working conditions as legally permitted.” But Apple policy also generally forbids employees from making any public disclosures without prior approval, including statements to the press, and it orders employees to refrain from discussing “compensation, training, recruiting, and other human resource information” after leaving the company, which it attempts to enforce through non-disclosure agreements. The handbook also bars employees from sharing information about their coworkers’ “compensation, health information, or performance and disciplinary matters” without any footnotes about “rights to speak freely about wages, hours, or working conditions,” according to Gjovik’s complaint." [link]
​
"Experts familiar with the NLRA, including former NLRB officials, have said that Gjovik has a strong case against Apple — especially her complaint about CEO Cook threatening the employees who leaked details about the meeting concerning pay equity. “What he’s saying here goes too far,” NLRB Chair Wilma Liebman told Bloomberg about the Cook memo. “It’s restrictive of people’s ability to talk about employment policies.” Mark Gaston Pearce, another former NLRB chair who, like Liebman, led the Board during the Obama administration, tweeted that Gjovik’s case could be “a vehicle” to reverse pro-management rulings by the Board under the Trump administration." [link]

"The night before Gjovik was fired, she received a direct message on Twitter from a random helpful follower urging her to take steps to protect her privacy, in a general warning that invoked his own experience with private sector surveillance. Hours later, she asked her Twitter followers if it would be “over-paranoid” to worry about the security of her messages on Apple’s iCloud. Soon after, she began taking her personal information off of servers controlled by Apple and, as she told the tech publication Protocol, Gjovik began to unplug smart devices in her home. She told Truthout that she has no proof of the company using non-public information against her, but noted that internet trolls defending Apple have used information that she has not shared about her health and compensation to insult her, calling the matter a “nightmare sandwich.” Gjovik has also documented how supervisors at Apple were warning her to be wary of private-sector surveillance when she told them how she was locking horns with her property management company." [link]

"In the Summer, Three Workplace Activists Were Making Waves at Apple. All Three Are Now Gone," Slate, Nov 23 2021 [link]

"Using IP leak investigations as a way to discourage people from speaking out against workplace issues should technically violate labor laws, though such laws have toothless protections for whistleblowers and are subject to interpretation by whomever is in charge of the NLRB at any given time. According to organizers, by conflating IP leaks with workplace whistleblowing, Apple can better enforce a culture of secrecy. As evidence they point to a memo that CEO Tim Cook released in September stating “people who leak confidential information do not belong” at Apple, which referred to both product information and details of all-hands meetings. Gjøvik used this memo as evidence in a NLRB complaint she filed in October, which alleges that the company’s tendency to equate whistleblowing and activism with leaking violates labor protections. “Someone needs to intervene,” she said. “If we can get the NLRB to send something to Apple employees saying they do have rights … that’s a first step.”  [link]

"Last month, Ashley Gjovik was fired from her senior program manager position at Apple. Now, she's just completed midterms during her final year of law school. As she studied for her labor law exam, Gjovik told Insider that she noticed the "unlawful examples" mentioned in her textbook were "nearly identical to terms in Apple's employee policies." Gjovik said that led her to file complaints with the National Labor Relations Board on Tuesday in which she alleges that Apple's anti-leaking stance and strict employee handbook violates US labor laws."

Gjovik emphasized that while there are IP laws protecting a company's confidential product information, limiting discussion about employee meetings potentially prevents workers from communicating about workplace concerns, a right protected by the NLRB. "This seems like one of the most fundamental changes that need to happen to enable workplace and employee organizing at Apple," Gjovik said. "If people are terrified that they can't talk to each other about work conditions or talk to a labor lawyer about work conditions - a union couldn't even begin to organize."
NLRB FOIA Requests:

​
​"Gjovik’s specific complaints against Apple date back to mid-March, when she cited unsafe working conditions related to “chemical exposure” at her Apple office in Sunnyvale, California, where more than 100 employees are based. Her office, known as “Stewart 1” within Apple, is located on what the Environmental Protection Agency refers to as the “TRW Microwave Superfund site”, a location requiring special oversight owing to previous contamination by hazardous waste materials in the soil and groundwater beneath the building. Gjovik said her concerns were brushed aside and she was warned against speaking up about them. [link] ​
Sarbanes-Oxley Act (SOX), 18 U.S.C.A. §1514A


"The labour department will examine whether Apple retaliated over claims about occupational safety and hazardous waste management liability, alongside a third allegation that falls under the Sarbanes-Oxley Act, or Sox, which sets out the rules for financial record keeping. Gjovik pointed to a potential conflict of interest regarding Apple board member Ronald Sugar, chair of the audit committee, as he was previously chief executive of Northrop Grumman, the defence company responsible for the dump — and maintenance — of waste materials beneath the Sunnyvale office. Sugar could not be immediately reached for comment."  [link]

"Stephen Kohn, an employment lawyer and an expert in US whistleblowing law, said the burden of proof needed for the agency to open an investigation was high, as the employee must have already established enough evidence that, unless rebutted, would prove the case. He said the case would be closely watched because it was especially rare for a labour dispute with Big Tech “to break into the public” domain. The labour department rarely investigated such cases, he added, because of the widespread use of non-disclosure agreements to “silence and intimidate whistleblowers”. [link]

"Gjovik’s case was “especially unusual” and noteworthy because of the three separate statutes or laws that may have been broken, said Michael Duff, a former attorney at the National Relations Labor Board. “Federal agencies exercise what in the context of criminal law is known as prosecutorial discretion,” he said. “They are very careful of what cases they move forward because they have scarce resources, so they must have a strong reason to believe they can prevail.” [link]​
Section 11(c) of the Occupational Safety and Health Act (OSHA), 29 U.S.C. §660
​
"By the middle of summer, things began to escalate. On July 23, Gjovik made The New York Times quote of the day for questioning why Apple management wanted its employees to return to office work as the Delta variant of COVID-19 started to spread throughout the country. Around the same time, she took to the company’s messaging platform, Slack, to ask her coworkers if they have had negative experiences dealing with HR, receiving numerous responses in the affirmative."  [link]
​

"As far as her complaint to the SEC is concerned, Gjovik said she wants to stop the company from misrepresenting how it treats its employees. The complaint centers around a shareholder, Nia Impact Capital, who alleged that Apple is exposing itself to employment litigation risk by enforcing a culture of secrecy beyond that which is necessary to protect its trade secrets. The company responded by claiming that “Apple does not limit employees’ and contractors’ ability to speak freely about harassment, discrimination, and other unlawful acts in the workplace.” Gjovik’s SEC complaint alleges that these are “false & misleading statements of material importance” by Apple, citing an agency commissioner who warned in September 2020 against companies engaged in “woke-washing where companies attempt to portray themselves in a light they believe will be advantageous for them on issues like diversity.” [link]
​
​

Generally: Retaliation in this Matter

Download File
From Jan 2017 through Sept 2021, Ashley worked in Apple's "Stewart 1" office building at 825 Stewart Drive, Sunnyvale CA. Apple's leased the building since ~2015.
​
The building & the property it sits on were declared an EPA Superfund site in the 1990s. The EPA refers to it as the "TRW Microwave" Superfund site. The responsible party (who dumped the chemicals & thus who is still responsible for cleaning them up safely) is Northrop Grumman who acquired TRW Microwave.  The EPA page for it is here: https://cumulis.epa.gov/supercpad/cursites/csitinfo.cfm?id=0901181

Due to the close proximity and intermingled contaminated groundwater plumes of two other Superfund sites, the TRW Superfund site is considered part of the "Triple Site," a group of three Superfunds. 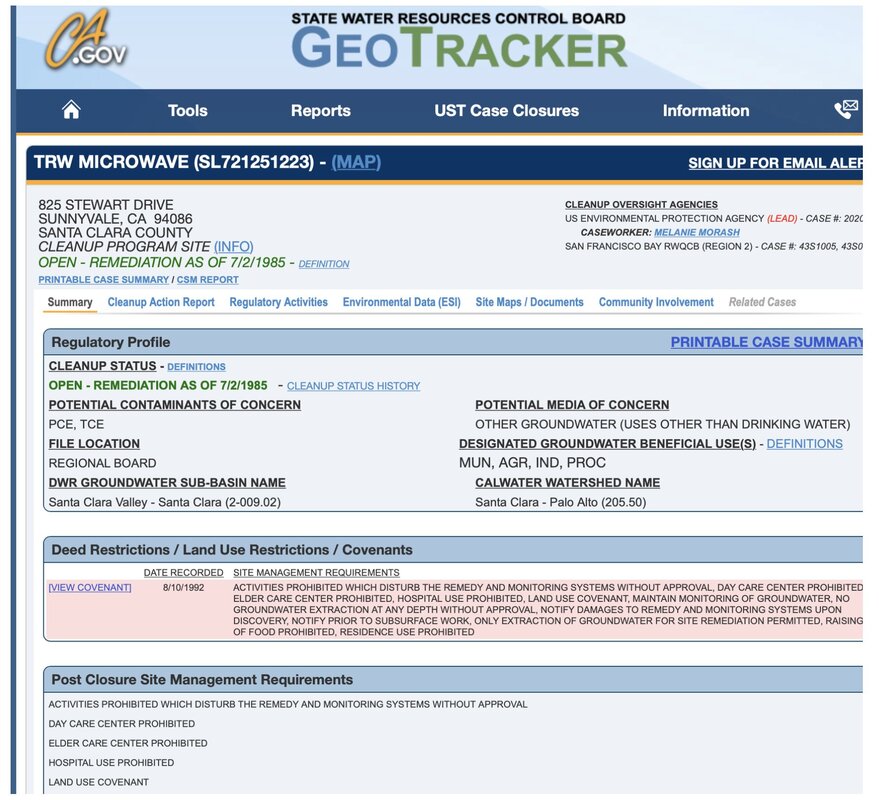 For more information on ​Superfund & other chemical clean up sites in Silicon Valley, see: https://www.whatsintheair.org/silicon-valley.html